Plastic is now ubiquitous.
We’re living through the Plasticene.
You can buy a 2.4m plastic cactus for your hallway; you won’t have to water a real cactus using tap water, that itself now contains plastic micro-particles. 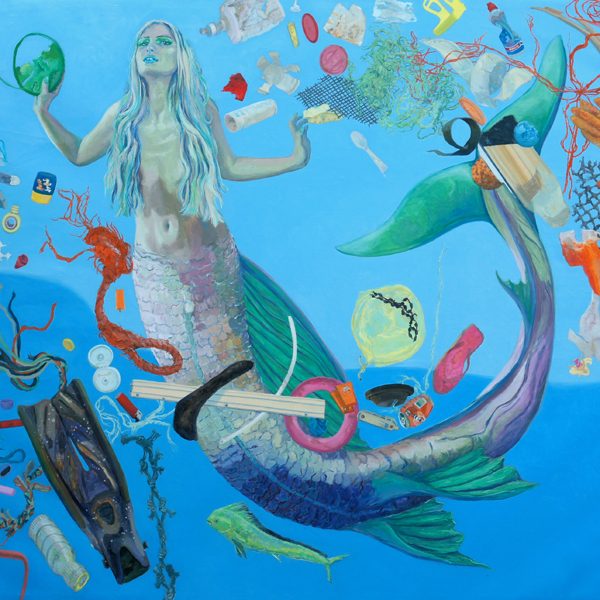 ‘The plastic arts’ is a term that had existed long before plastic itself. I have wanted to try and look at the plastic objects I had collected over the last few years as naively as possible, as though life-drawn for the first time by an art student intent on learning through prolonged observation. Not interested in the Neoplastism of the De Stijl movement, instead my initial thoughts were of a metamorphosis and of bringing ancient mythology and plastic ¬- a 20th century invention – together in an uncomfortable way. However I found myself reluctant to go too far down the path of the collision of two plastic objects to transmogrify into a third construct – yet there is a definite modernist basis for some of the elements.

The mermaid painting backdrop idea came from a small toy figure found as sea plastic litter. It is actually the top half part of a small Barbie figurine, but I initially thought it to be Disney’s The Little Mermaid. I researched mermaid art and came across the mermaid of Zennor and was attempting to build a composition around that and some lines from Ovid but the plastic overwhelmed it.

Wood is an obvious counterpoint and natural contrast with which I have felt more at ease. The plastic components are essentially ready-mades although altered by collision with natural processes in the environment and some minor assemblage. Wood is also an ancient, relevant building material. In this installation, the wood forms a sanctuary, a natural structure and the plastic is an imposition on it and in it.

There is no doubt the terrible convenient addiction that societies have developed for plastic eases the struggle against decay in the short term. What now looks to be a permanent error is that plastic is with us for the foreseeable and has been injected into the human food chain. I can imagine a child born being described as a plastic native to perhaps a planet slowly choking at Plastigeddon, 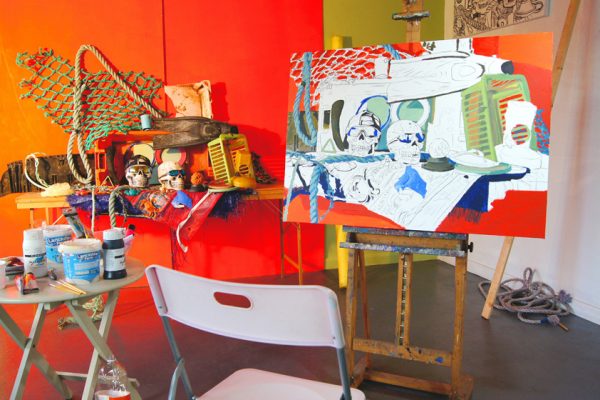 View all posts by TufiArts